It was a nice clear night and even though it was a school night I decided to set up for a bit to try out using the Ekos Scheduler to kick off all the different tasks for an imaging session. I have tinkered with the Ekos Scheduler for EAA before, but I wanted to set it up for a complete imaging session… from slewing, to focus, to alignment, to guiding, and finally to running the capture sequences.

After work I uncovered the scope and connected everything up. Once it was dark enough plate solve I ran the Ekos polar alignment routine. The mounts altitude was pretty spot on but the azimuth was off by a few minutes. I knew it was going to be since I accidently kicked the tripod when I uncovered the scope. No worries, just a few minor adjustments and both were under 15 arc seconds of error.

I decided to shoot IC 434, the Horsehead Nebula, again. I have captured this the last couple of sessions. Shooting it again so I can compare the results with the others. I decided to capture 3 minute (180 seconds) guided exposures tonight. I want to be able to compare them with 5 minute guided exposures I shot a few nights ago. 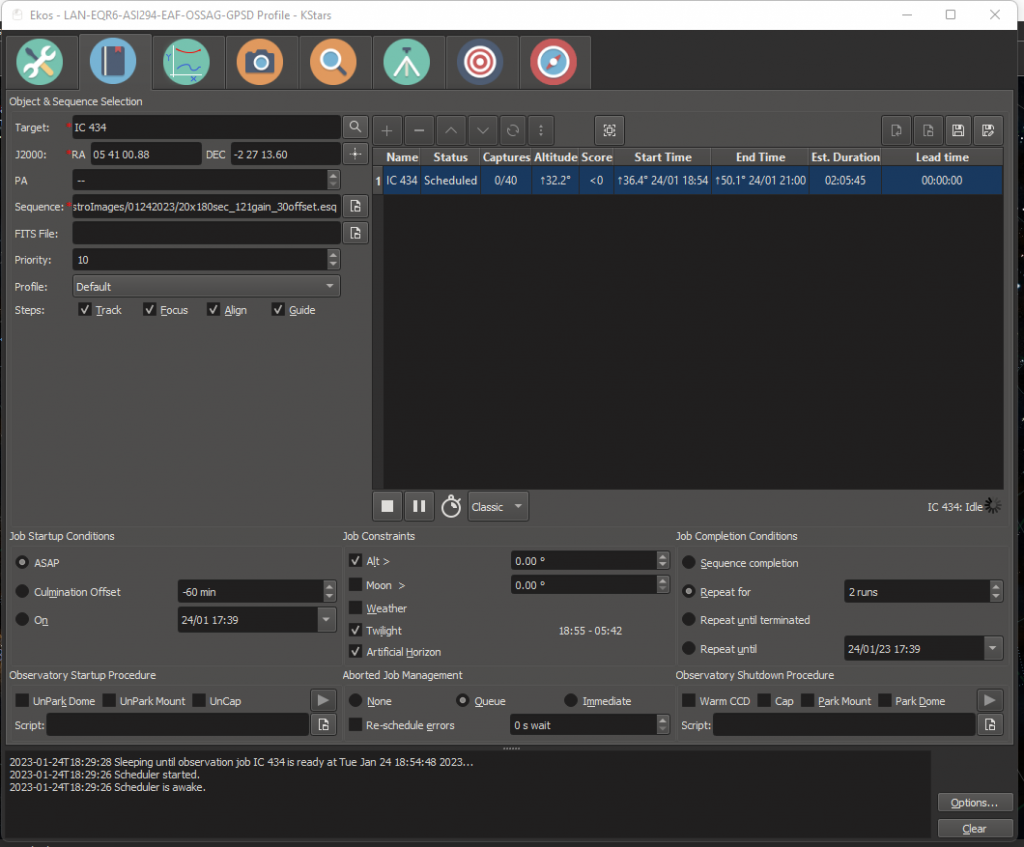 I selected the checkboxes for Track, Focus, Align, and Guide. I set the capture sequence to repeat for 2 runs. Since my capture run is for 20 x 180 second exposures, 2 runs will give me 40 x 180 second exposures or 2 hours of total exposure time. I added the Job to the Queue and then clicked the Play button. Since it was before Twilight (18:55) the job was set to scheduled with a start time of 18:54:48.

I unparked the EQ6-R Pro mount and waited till 18:55 (18:54:48) for the job to kick off… and it did!!! The status of the Job changed from Scheduled to Running and Ekos started working through the different tasks in the Job. 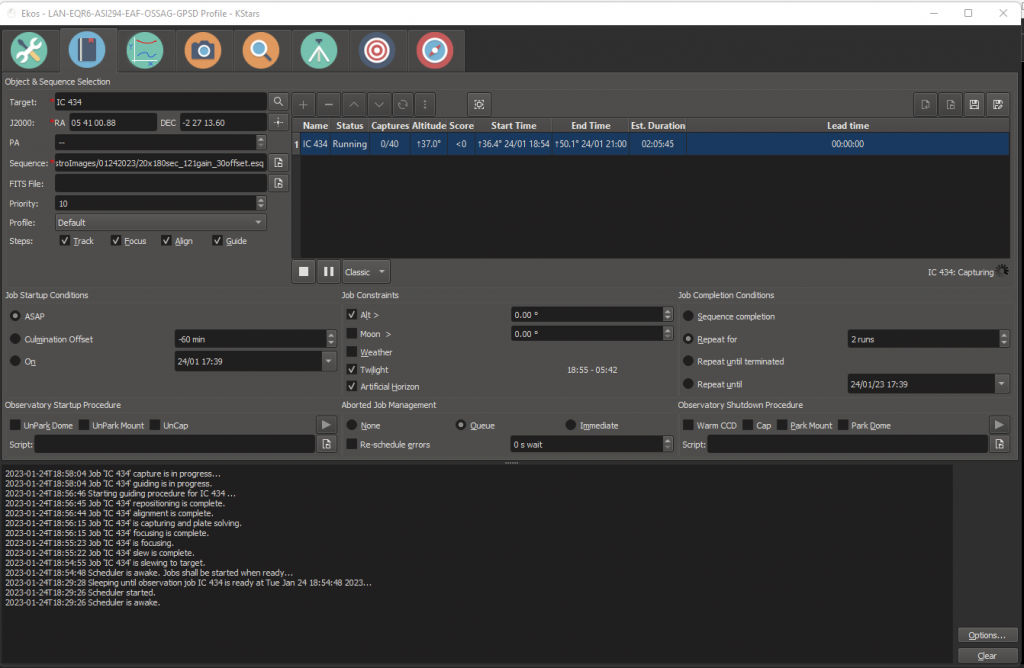 First Ekos slewed the mount to IC 434 and then ran the autofocus routine. After focusing Ekos did a capture/solve/slew to get the Horsehead Nebula with in my target accuracy (10 arc seconds) as configured in the Align module. Once on target the guide calibration started and once it completed successfully guiding started. Finally the capture sequence started capturing 180 second frames. My guiding RMS averaged 1.07 over the duration of the session.

In the Ekos Scheduler Module the log windows displays each step of the Job and the status. From the Setup module the status of the equipment, focus, guiding, and the capture sequence can be easily monitored. 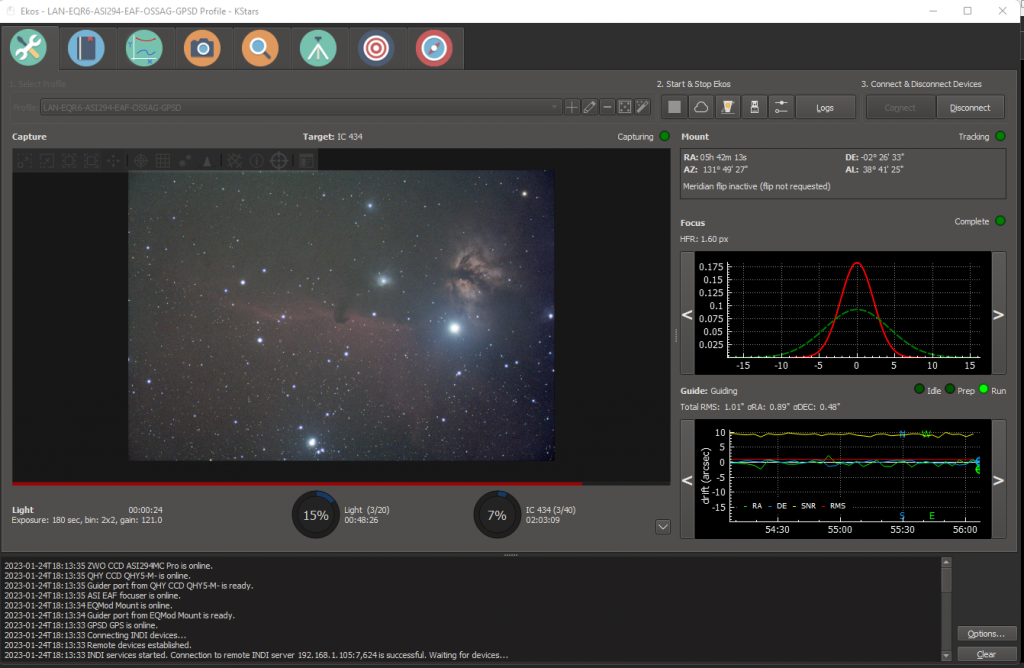 I titled this post “Sort of EAA,” the reason for that is it is a bit different than how I usually EAA observe, hence the other part of the title “Set It and Forget It.” After I set up the Job I took off and did some other things. Since this was the first time setting this up I did come back and check that the job had kicked off as expected, and I checked in on it a few times, but it pretty much just ran and captured images of IC 434 – set it and forget it.

I did set SharpCap Pro up to monitor the folder and live stack the images as the came in but I was not there watching it the whole time. I think (IMHO) it is still EAA in the sense that the captures were live stacked with no post processing. A bit different in how I usually practice EAA in the fact I was not at my desk observing the frames as they were stacked. Also it is longer exposures over a longer period of time than I typically do during an EAA session. The tracking and guiding accuracy of the EQ6-R Pro mount is what has enabled me to capture these longer guided exposures.

This EAA image was captured with my ZWO ASI294MC Pro cooled to -10 C through my SVBONY SV503 102ED Scope with 0.8 Focal Reducer and a SVBONY IR/UV Cut filter. The SV503 is focused using a ZWO EAF and the Ekos Focus Module. Guiding with the Orion Starshooter Autoguider (OSSAG) through a SVBONY SV106 60mm guide scope using the Ekos Internal Guiding. All gear is mounted on a Sky Watcher EQ6-R Pro.

The mount and cameras are remotely controlled with KStars/Ekos with INDI Server running on a Raspberry Pi. The images were live stacked using SharpCap Pro. Images have been resized (80% of original) and/or cropped for file size but otherwise appear just as I observed them. 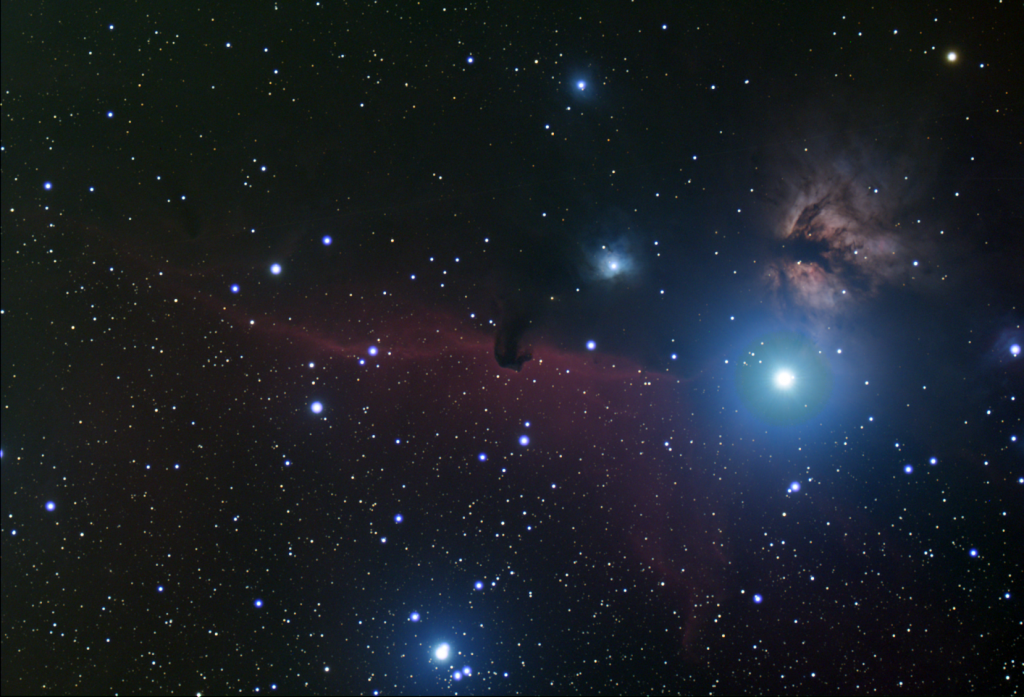 NGC 2024, the Flame Nebula, looks great off to the right. There is a good bit of detail in NGC 2023 the emission and reflection nebula between the Horsehead and the Flame. IC 432 can just be seen peaking out almost out of the FOV to the right and the reflection nebula IC 435 is near the top center. I can just resolve some details of the dark cloudy nebula off to the left just above where the red of IC 434 starts to fade out.

Nice quick capture session with a nice result. It was pretty cool being able to configure up a session and just let it run. Will definitely be using it more in the future.

Since it is a school night I packed things up early, just after 9 PM. The temperature was around 33 degrees F and some clouds were starting to move in from the Northeast when I covered the scope.