My Celestron Advanced-GT EQ5 mount has served me very well for many years… but I am ready for an upgrade. I have been looking at Sky Watcher mounts for a while, and was thinking about either the HEQ5 Pro or the EQ6R Pro (I have always been leaning toward the EQ6R). I decided on the EQ6R Pro, with the payload and features it should keep me busy in the hobby for a good long time (probably the last mount I will ever need, probably).

I ordered the Sky Watcher EQ6R Pro from AgenaAstro on a Saturday. It was listed “In Stock” and shipped on that Monday. It made it’s way across the country at a sloth’s pace and arrived at my door a week later on Monday, January 16, 2023. Even though it seemed like forever… it was pretty quick for the size and weight and shipping cost (FREE SHIPPING!!!).

I unpacked the mount and set things up in the room over the garage, aka my office, to check things out and do some testing with Ekos and INDI. Of course we are going to be cloudy for the next few days so I have plenty of time to tinker with it and get a feel for the operations. The mount came with a power cord with a cigarette lighter style power plug. I am using this AC to 12VDC 10A power adapter to supply power to the mount.

I mounted the SV503 102ED with the guidescope and cameras to balance the mount. I am using one counter weight which is nearly at the end of the counter weight shaft to achieve balance. I am probably going to mess around with this a bit to see if using two counter weights up the shaft closer to the mount head works better, but for now the mount and gear is balanced…

…and it is glorious

In order to use the EQ6R Pro mount with my Raspberry Pi indi server I need to compile the indi-eqmod 3rd-party driver which is used by the Sky Watcher EQ6R (and many other Sky Watcher equatorial mounts).

Easy to do with the code below since I already have the indi-3rdparty packages cloned from the repository.

Once indi-eqmod is compiled and installed I can restart the indiwebmanager. The EQMod Mount driver is now available in the Driver drop down list.

In INDI Web Manager I created an INDI equipment profile with the EQMod driver, CCD Simulator, GPSD, and the Focuser Simulator for the initial testing.

I set up an Ekos profile mapping the INDI equipment to the correct devices. Saved the profile and connected. The mount connected up with out issue. 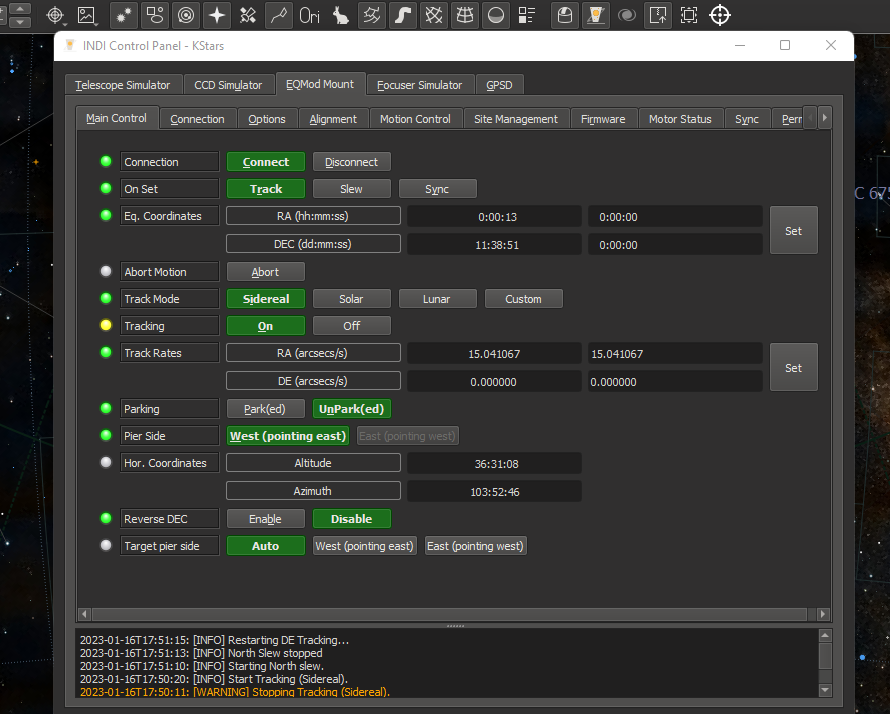 With the mount connected through INDI I verified that the GPSD information is updating the site information on the mount. I am able to turn tracking on. I did some slews to different objects. Parked the mount to return it to the home position and verified the setting circles where back at zero. Everything seems to be working as it should.

Looks like the next clear night is probably going to be Friday. I have a few days to tinker with things and get them dialed in. Looking forward to trying the new mount out for some EAA then.

Also need to update My Gear page with the new mount and specs. I’ll update it once I have a picture of the mount set up for observing.