The Ekos Scheduler is primarily used for scheduling an automated Astrophotography session, but it can also help automate captures for EAA. This way you can spend less time setting up, or re-setting up, captures and more time observing and enjoying your live stacked images. During my EAA observing sessions I usually run a set of exposures and after capturing 5 minutes of exposures I capture/solve/slew to recenter/reframe the object and then run another set of exposures for 5 minutes, rinse and repeat. This can be done manually, but it is pretty easy to automate most of this process using the Ekos Scheduler. In this post I am going to walk through how I use the Ekos Scheduler for EAA by creating the Capture sequence in the Ekos Capture Module and then using the Ekos Scheduler Module to slew to the object, use plate solving to center the object, and then capture images of an object.

Here is the basic workflow for setting up the Ekos Scheduler for an EAA capture:

That’s it at a high level. Now on to the details…

After I have connected the Ekos profile and verify everything has connected up as it should I open the Ekos Capture Module (the Camera Icon) to create the capture sequence. I am setting this up for 10 x 30 second exposures using bin 2×2 and a gain setting of 121 gain. This sequence will take 5 minutes (10 x 30 = 300 seconds = 5 minutes) not including transfer times. I am saving the FITS captured by the sequence to a directory on my local machine. I also check Duration and TS (Timestamp) to add the exposure time and timestamp to the FITS file name (this makes it a bit easier to organize and keeps it from overwriting files). 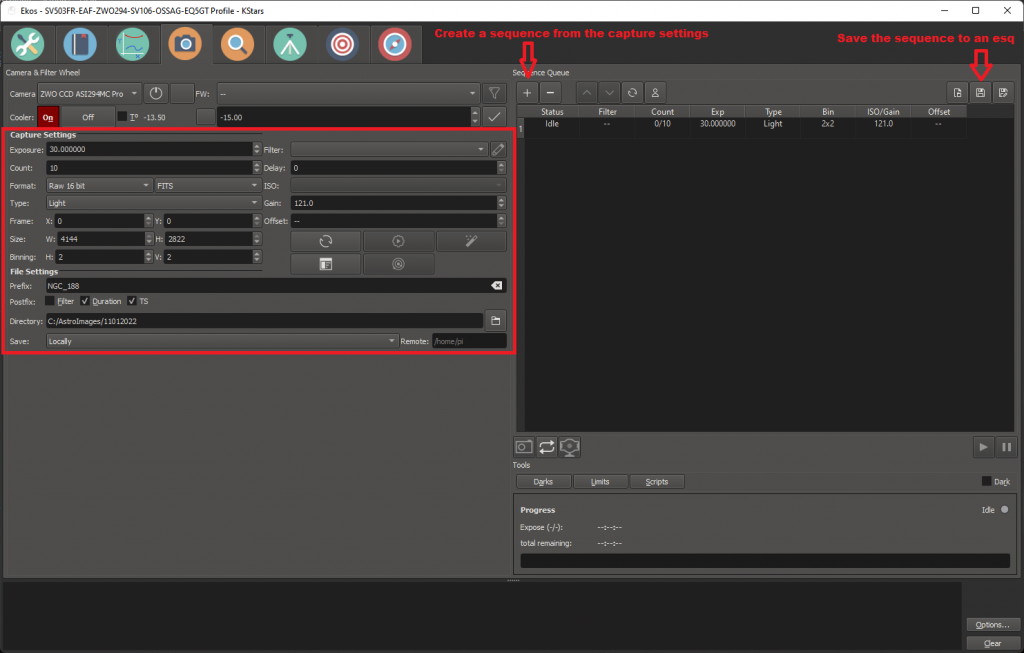 Once I have the Capture sequence configured and added to the sequence queue I save this off to an Ekos sequence file (.esq). The File Settings Directory is set to a base directory for the session. The job scheduler will automatically change the target name for the file names and create a subfolder in the configured directory of the object name configured in the scheduled job. So you can use the same capture sequence file for multiple objects. 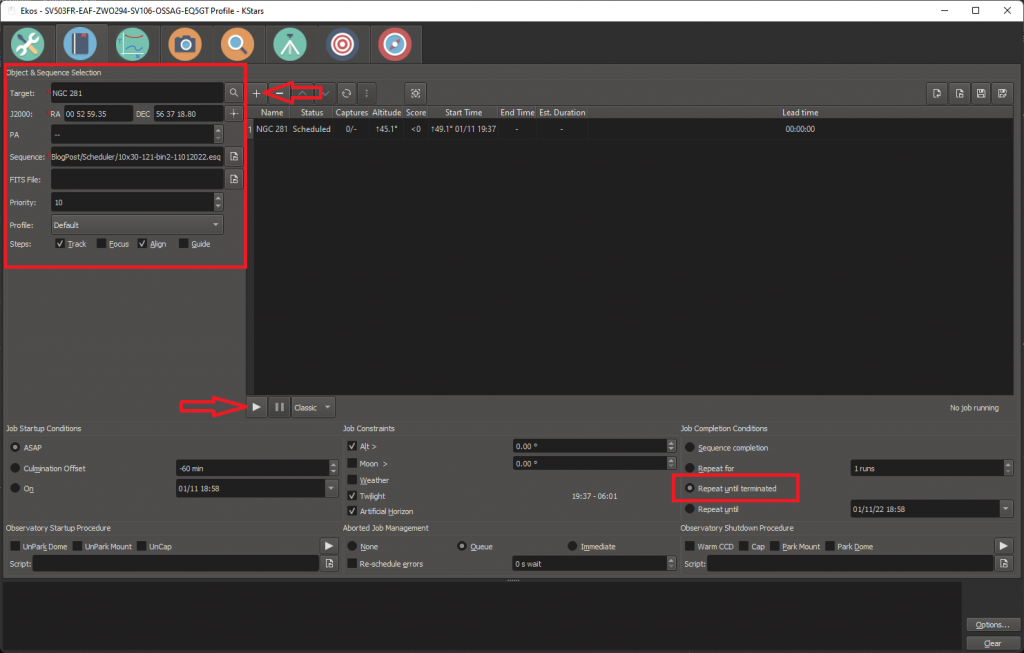 I configure the job to Repeat until terminated. Something I have found here is that it repeats the capture sequence until terminated, not the job itself. If you want to re-slew/capture and solve/slew you have to stop the job and then restart it. It seems to me that this is not working exactly as it should, seems like it should repeat the “job” not just the capture sequence. I might submit a bug report on this.

If I want to recenter the object I stop the scheduled job and then press play again to restart it. When the job restarts Ekos will re-slew to the object, capture and solve to make sure it is within the threshold, and then start the capture sequence.

The Ekos Scheduler is really meant to be a way to set-it-and-forget it for Astrophotography where you might not be around while the images are being captured. With EAA since I am observing the images at the same time they are being captured I don’t need quite as much automation, but it does make things a bit easier. It also helps keep the workflow consistent so I don’t miss steps.