Several years ago I had set up a Raspberry Pi to allow me to control the telescope using Stellarium and image through the Raspberry Pi’s camera. I was tinkering with some EAA before EAA was EAA. It was completely self-contained in a case, replaced an 1 1/4″ eyepiece with the Raspberry Pi’s camera, and could be operated remotely. I still have the AstroPi I put together but a lot of things have changed so I built an updated one.

In this post I’ll walk through what I did to get Astroberry Server (and other Astronomy software) installed on a Raspberry Pi 4, to set up the virtualgps with my location information, and to set up and test KStars/Ekos to control my mount and camera.

Setting up the Raspberry Pi and Installing the Software
I picked up this CanaKit Raspberry Pi 4 8GB kit which comes with a Raspberry Pi 4 and everything you need (and then some) to get it up and running (128 GB SD card, case, heat sinks, fan, power supply, HDMI cables, etc).

The SD Card with the kit is preloaded with NOOBs but I want to use the AstroBerry. So I grabbed the Astroberry image from here and reimaged the SD Card. Installed the newly imaged SD Card into the Raspberry Pi and booted it up. Followed the initial wizard to set locale, time zone, and such. Then set up the Wifi to connect to my home network. The default user in Astroberry is astroberry and the default password is astroberry. I changed the default password for the astroberry user and configured VNC to use Unix username and password (by default it is set up to authenticate with just a password). Note that changing the VNC authentication method breaks the NoVNC web portal in Astroberry, just use a VNC client instead.

I can now run the Raspberry Pi headless (without a monitor/keyboard/mouse) and connect to it from my laptop or desktop using VNC. This Raspberry Pi 4 is WAY faster than the old Pi 2 which I had used originally for the AstroPi.

The Astroberry Server includes a suite of great Astronomy software for EAA, including KStars/Ekos (planetarium and telescope control), the INDI framework (drivers for mounts and cameras), and several image capture programs.

AstroDMx is not one of the imaging programs include with Astroberry. I have been messing with AstroDMx on Windows and there is a package for the Raspberry Pi so I downloaded and installed it.

May or may not use AstroDMx, but it is there if I want it.

I also installed Stellarium which is a free opensource planetarium program which I have used in the past and am familiar with the set up for controlling my Celestron CG5 mount.

I may or may not use Stellarium but since I am familiar with it, it’s there if I want to use it.

All the software I need/want (for now) is installed and up to date, so now on to setting up the virtualgps to provide location and time data for the Astroberry software.

I edited the /etc/location.conf and added my longitude, latitude, and elevation. 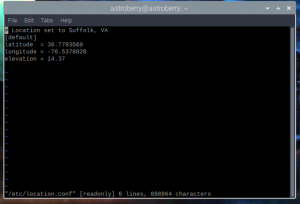 Restarted virtualgps and gpsd, then ran gpsmon to make sure the location information was updating from the virtualgps. 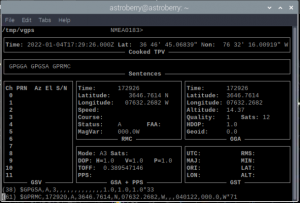 On to the fun stuff… getting telescope and camera control working.

Launch KStars from the icon on the Astroberry’s task bar. After launching KStars the first run wizard runs and I configured my location and verified the time was correct. This is just to get things started, I’ll be using GPSD for location data which I’ll configure in the Ekos profile. I launched Ekos from the KStars toolbar to create a new profile for my mount, camera, scope, and GPS. 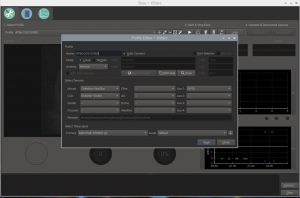 I created profiles for each of my scopes with the Celestron NexStar mount, SVBONY SV305 Camera, and GPSD. The profile shown above is for the AT66ED as the primary scope, which is the one I will likely use most. 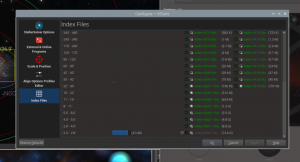 The index files are marked as required, recommended, and optional. I loaded them all up. This is multiple-gigs of FITS files, so it took some time.

With KStars and Ekos configured I am ready to try it out for reals… just need a clear sky.

First light!
Up until now everything was done on my desk, now to connect the Raspberry Pi up to the mount and camera to see what I can get it to do.

Connected a USB to serial cable to one of the Raspberry Pi’s USB ports and connected up the hand controller serial connection. Some of the newer mounts have a direct USB connection for this, but mine is older so the USB to Serial to Hand Controller RS232 cable is required. Then I connected my SV305 Camera to a another free USB port on the Raspberry Pi. 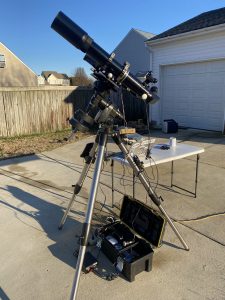 Powered on the Raspberry Pi and made sure I could connect to it with VNC from my laptop and waited for it to get dark.

Launched KStars and from the KStars toolbar I launched Ekos. In Ekos I selected the Profile I had created for the AT66ED with the SV305 Camera, started the profile, and the INDI control panel launched and I made sure the mount, camera, and GPSD connected. 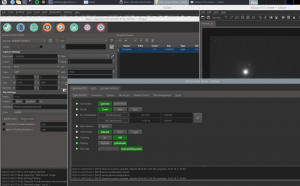 That’s a quick capture of Jupiter in the picture above. I slewed to Jupiter using the Hand Controller and used Jupiter to make sure I was in focus.

One of the things I noticed immediately when I went to set up the hand controller is that the hand controller’s time was set to the correct time. That’s was a good sign since it is getting this from the INDI connection as it does not have an internal real-time clock.

With the connections up in Ekos, I selected an object, the bright star Capella, in KStars. Right clicked on it, selected my scope, and clicked Goto. The scope slewed to Capella. Huzzah! KStars/Ekos/INDI is in fact communicating with the mount.

Now to try plate solving… On the Ekos toolbar select the Align icon. I changed the Solver Action to Sync and then clicked Capture & Solve. 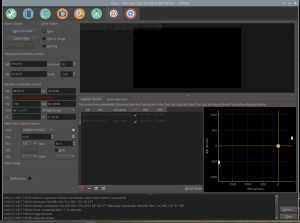 I did not do any alignment of the scope. It is roughly polar aligned, I just ran the quick align to initialize the hand controller after powering it up. The plate solving in Ekos got me on target usually with in 2 moves. I would select an object in Kstars, right click and Goto it with the scope. After it slewed I ran Capture & Solve with the sync action and it would show me slightly off where I wanted to be. Selected the object again and Goto, when the slew finished I ran the Capture & Solve again and it had me dead on.

Here is a screen capture of M42 in Orion after using this Capture & Solve method: 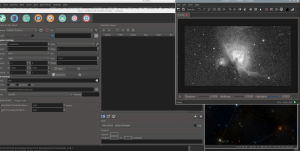 Once I get the polar alignment dialed in this will probably be spot on.

My Astroberry Raspberry Pi is ready for some EAA!!!

What’s Next
I have the basics working. Telescope mount control, camera control, and I am getting more familiar with KStars. Here is my list of things to do (keep an eye out for future post):

Cool little project (well I think it’s cool anyway). Looking forward to expanding on it and getting it dialed in. Will be nice to observe from the warmth of my living room.

If you have any questions about this or any of the steps, or if you have any tips or tricks for Astroberry/KStars/Ekos, please post them in the comments below.

Looking forward to the next clear night…

20 thoughts on “Setting Up a Raspberry Pi for EAA…”