It was clear and very cold – a bit dryer cold than the last EAA session, but still cold. No frost on the scope or mount, but my observing table had a thin layer on it. Dew Heaters did what dew heaters do keeping the telescope lenses nice and dry. Not a lot of Messier Objects that I have not already captured are up this early so I decided to try a few dimmer, more difficult, targets.

First the Flame Nebula or NCG2024 over in Orion. I have captured this one before but in this session I did a lot more exposures. This is a live stack of 80 x 15 second exposures at 400 gain. 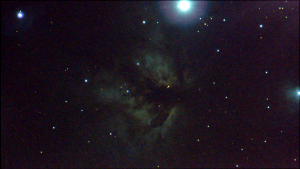 The bright star at the top of the frame is Alnitak one of the three main stars of Orion’s Belt. 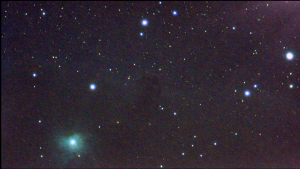 You have to try a bit to see it, but it is there, right in the middle of the frame. It started to show itself about 3 minutes into the live stack. The bright nebula to the lower left is NGC 2023.

NCG 3184 is a faint spiral galaxy in the constellation Ursa Major. This is a live stack of 90 x 20 second exposures at 450 gain. 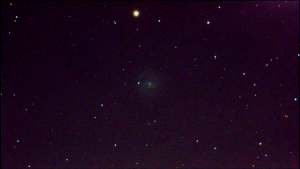 I can just resolve the arms of this spiral galaxy. The bright yellow star is HD89053. Even though it is still pretty dim and not a lot of detail this is my favorite capture of the night.

I couldn’t end the night without at least trying to get one Messier object to add to the Messier Log. I had tried M105 earlier in the night but it was still too low. Decided to try it again, and…

M105 is an elliptical galaxy in the constellation of Leo. This is a live stack of 45 x 20 second exposures at 350 gain. 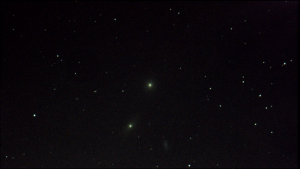 There are two other galaxies which are resolvable in this capture – NGC 3384 and NGC 3373.

M95 and M96 are right next to M105, but it was getting late so I decided they would have to wait for another night.