Another winter storm is on the way and snow is expected Friday and Saturday. I had not planned to observe, but the sky was clear and it may be several days before that happens again. It was a cold night, 28 degress, but nice and clear. Decided to get a quick EAA session in before I pack things up before the storm. Captured a few of galaxies and ended the night on M42, the Orion Nebula.

One thing I was doing tonight was tinkering with autoguiding in Ekos using the Orion Starshoot Autoguider through the SVBONY SV106 60mm Guide Scope. It worked quite well. Most of my exposure lengths tonight were 30 and 60 seconds.

NGC 2403 a spiral galaxy in the constellation Camelopardalis. I started with 30 second exposures at 300 gain, then increased the exposures to 60 seconds and this is a live stack of 50 frames of 30 minutes. 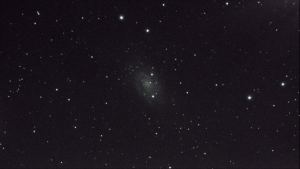 I can see a bit of detail in the spiral arms. Really liked looking at this one.

NGC 2841 an unbarred spiral galaxy in the constellation of Ursa Major. This is a live stack of 20 x 60 second exposures at 350 gain. 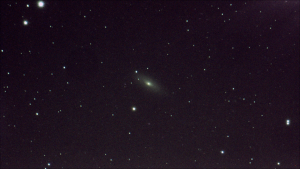 M81 – Bode’s Galaxy a spiral galaxy in the constellation Ursa Major. This is a live stack of 20 x 60 second exposures at 350 gain. 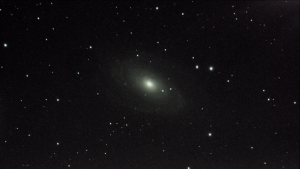 This is my best EAA observation of M81 so far. I can resolve the spiral arms sweeping out from the bright core. Really liked looking at this one too.

M82 Cigar Galaxy a starburst galaxy in the constellation Ursa Major. This is a live stack of 10 x 60 second exposures at 350 gain. 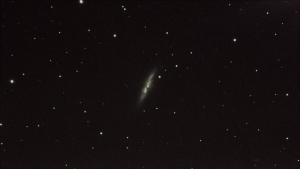 M81, M82, and NGC 2403 are all part of the M81 Group. The M81 Group is a group of galaxies in the constellations Ursa Major and Camelopardalis. There are 34 galaxies in the group. Looks like I’ll need to plan out an EAA observing session to see how many of these I can get 🙂 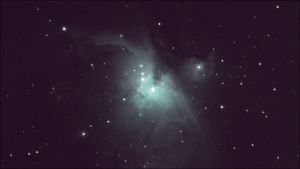 A recent post in the CloudNight’s EAA Forum referred to capturing and posting M42 like playing Stairway to Heaven in a guitar store. Yeah, but WOW! I think this capture came out great. I am digging the detail, especially in the darker nebula. The Trapezium Cluster can also be resolved. Not a bad way to end the night.

I packed things in at around 10 PM. Couple new galaxies tonight. Nothing new to add to the Messier Log. Going to keep after the Messiers but I think I might start working on the M81 Group as well.

Got to pack everything away to prepare for this winter storm.