We got a fair bit of snow, especially for here, but the storm is gone and the sky is clear. I set the gear back up on the driveway for some EAA. It was cold, 21 F, after dark. When I set the scope back up I left off the Stellarvue 80. I had a number of problems first with focus and then with the polar alignment, and did I mention it was cold.

I had a weird issue with the SV305 which I have not had before… when I disconnect and stop the profile from Ekos, if I restart the profile the camera would not reconnect until I restarted the drivers on the INDI Server. Not sure why this was happening but I recently updated KStars/Ekos/INDI on the client machine, so maybe that has something to do with it. Anyway… it was too cold to troubleshoot that, I just had to remember to restart the INDI Server drivers anytime I switched between clients. 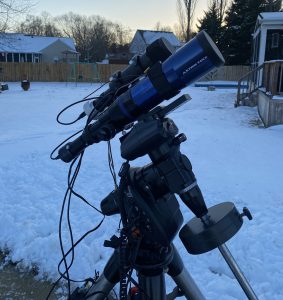 Due to the issues with focus and the alignment I was outside for a lot longer than I was expecting. Once I worked out all the issues, I was able to head back inside to get warm.

M67 – Open cluster in the constellation of Cancer. Live stack of 60 x 5 second exposures at 450 gain. 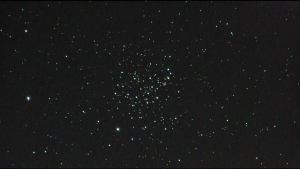 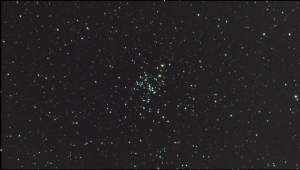 NGC 457 – The Owl Cluster in the constellation Cassiopeia. Live stack of 50 x 8 second exposures at 350 gain. 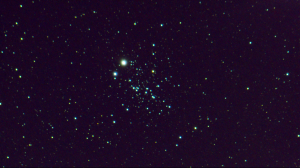 I have probably mentioned this before, but The Owl Cluster is one of my favorites to observe both through EAA and visually. This is my favorite capture of the night. 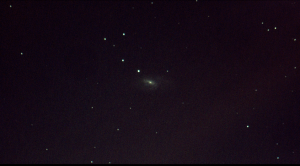 Leo was really low in the eastern part of the sky, and some clouds moved in as I was observing. I tried to get some time on M65 since it is right next to M66 but when the clouds moved in I decided it was time to pack it up.

Even though it took me a bit longer than I expect to get my gear set up, and my polar alignment is not perfect (it was too cold for perfect). It turned out to be a pretty decent night and I am adding 3 more objects to the Messier Log.