Another warm, clear night. Temperatures were in the mid to lower 70’s and it was a little less humid than the night before. My plan was to try to pick up a few more of the Messiers over in the area of the constellations Sagittarius, Ophiuchus, and Scutum. Had to wait a bit for my planned targets to rise over the garage but ended up with a galaxy in the M81 Group and 6 more Messier objects to add to the Messier Log.

Uncovered the scope and connected everything up just before dark. I did not do a polar alignment since the mount had not been moved since last night. Once the sun set I focused and checked plate solving. Set the camera cooling to -10 C. I am still using my darks and flats from a few sessions ago, I really need to shoot some new ones, but these are working fine for now. No issues with any gear or tech tonight, every thing worked as it should.

These EAA images were capture with my ZWO ASI294MC Pro through my SVBONY SV503 102ED scope with 0.8 Focal Reducer and live stacked using SharpCap Pro. The mount and cameras are remotely controlled with KStars/Ekos/INDI running on an Astroberry Raspberry Pi. The images have been resized and/or cropped for file size but otherwise appear just as I observed them.

M81, Bode’s Galaxy, and M82, the Cigar Galaxy, in the constellation Ursa Major. Back to my usual test subjects, checking GOTOs, focus, and plate solving. Ended up with a nice capture of these two. This is a live stack of 40 x 15 second exposures and 60 x 20 second exposures (total of 30 minutes) at 121 gain, bin 2×2. 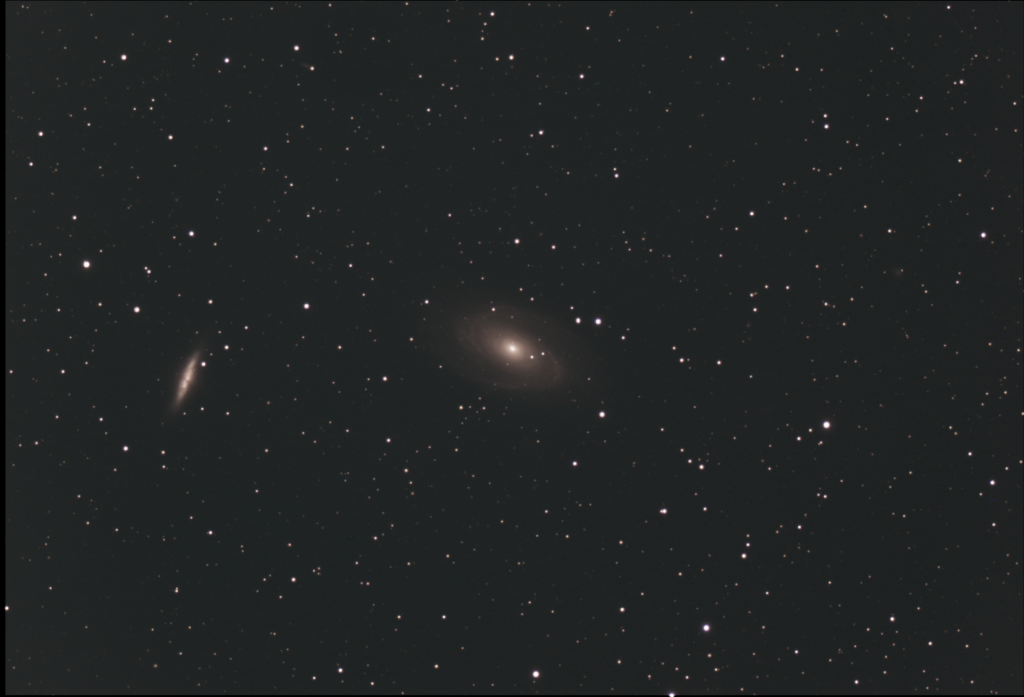 I let the camera roll for a bit longer than usual here since I was waiting for Sagittarius to rise over the garage.

Since I had time I looked around for another M81 Group Galaxy to have a peek at. Found one!
NGC 2366 is an irregular dwarf galaxy in the constellation Camelopardalis. NGC 2366 is an outlying member of the M81 Group. This is a live stack of 45 x 20 second exposures at 121 gain, bin 2×2. 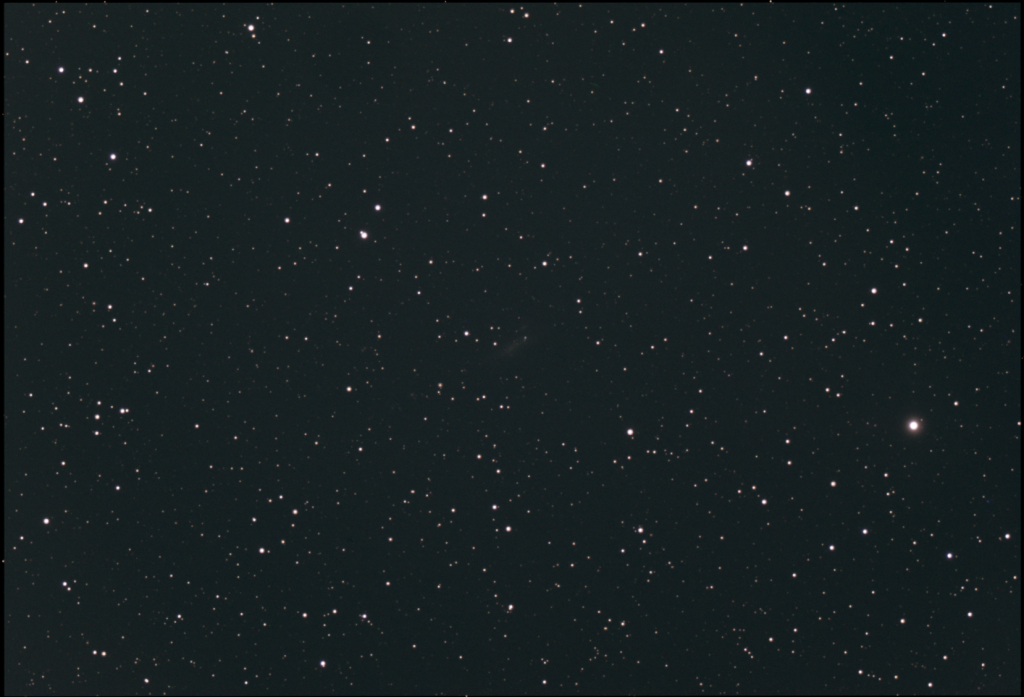 It is faint but it is there, a small bluish smudge in the center of the FOV. I was able to resolve it about 5 minutes into the live stack. Below is the SharpCap Annotation noting the location NGC 2366 in the FOV. 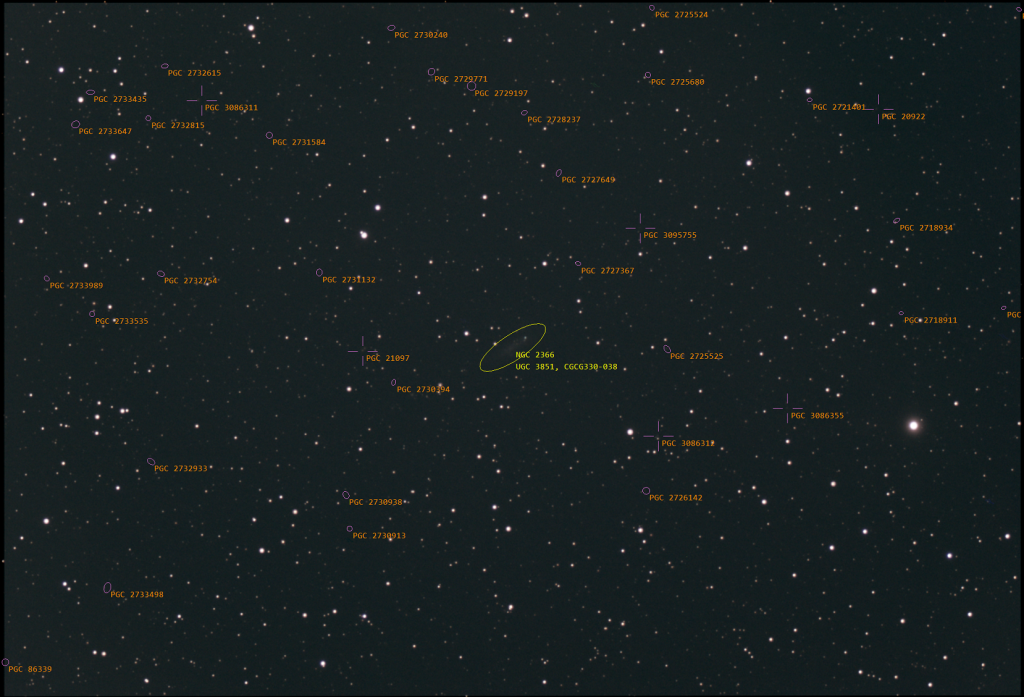 M27, the Dumbbell Nebula or the Apple Core Nebula, a planetary nebula in the constellation Vulpecula. This is a live stack of 60 x 15 second exposures at gain 121, bin 2×2. 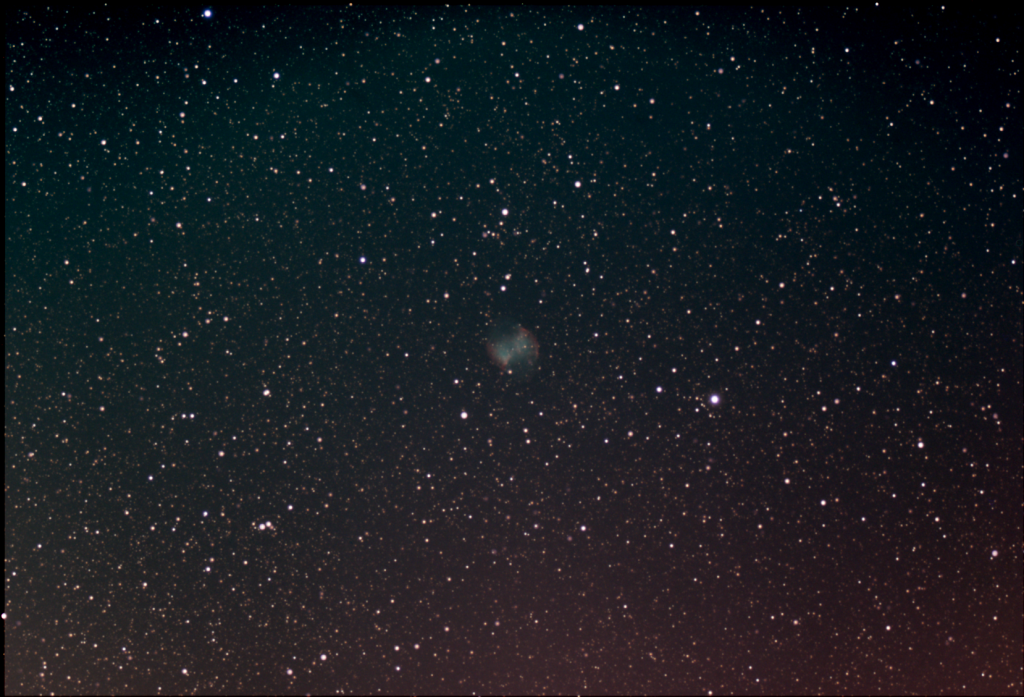 M27 was still low in the east so you can see a bit of the skyglow in the bottom of the FOV. 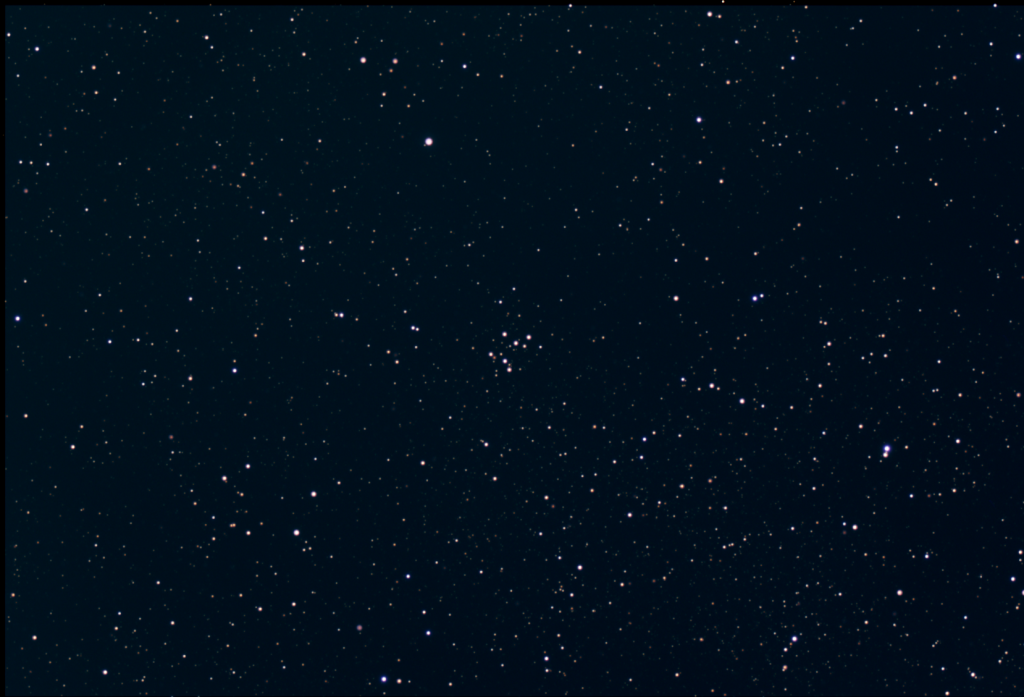 The first attempt at M29 was interrupted by a high thin cloud, after a few minutes the cloud moved on and I restarted the capture and live stack. 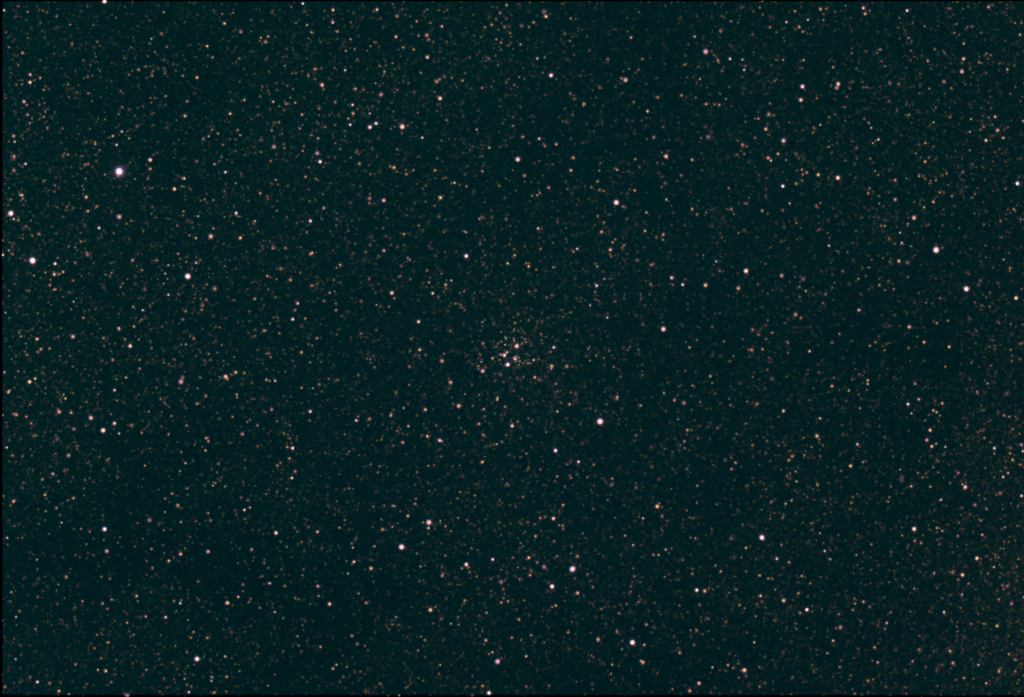 It’s after midnight now. Ophiuchus, Scutum, and Sagittarius have started to rise up over the top of the garage.

M9 is a globular cluster in the constellation of Ophiuchus. This is a live stack of 60 x 10 second exposures at 121 gain, bin 2×2. 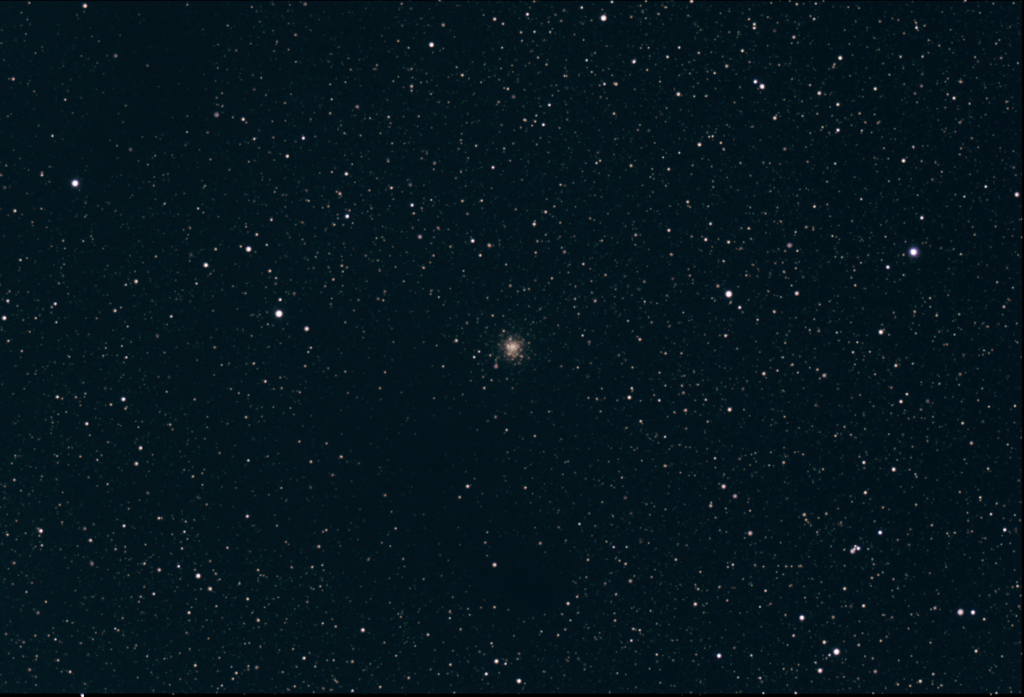 M8, the Lagoon Nebula, is a giant interstellar cloud in the constellation Sagittarius. This is a live stack of 40 x 15 second exposures at 121 gain, bin 2×2. 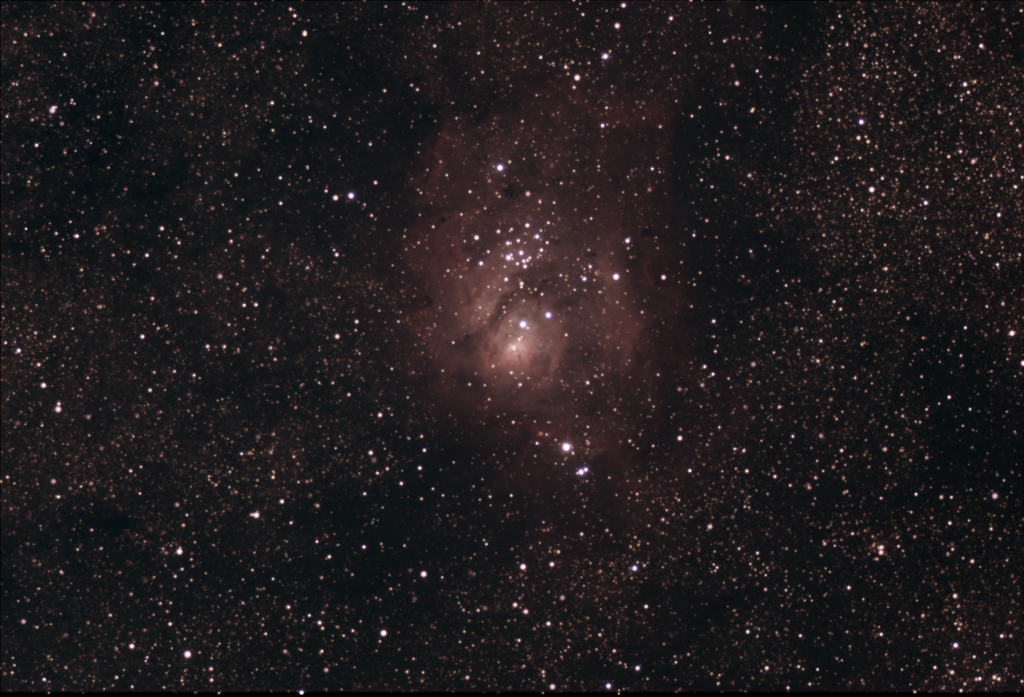 Wow! This was my favorite of the night. The open cluster of stars just up from the center is NGC 6530. 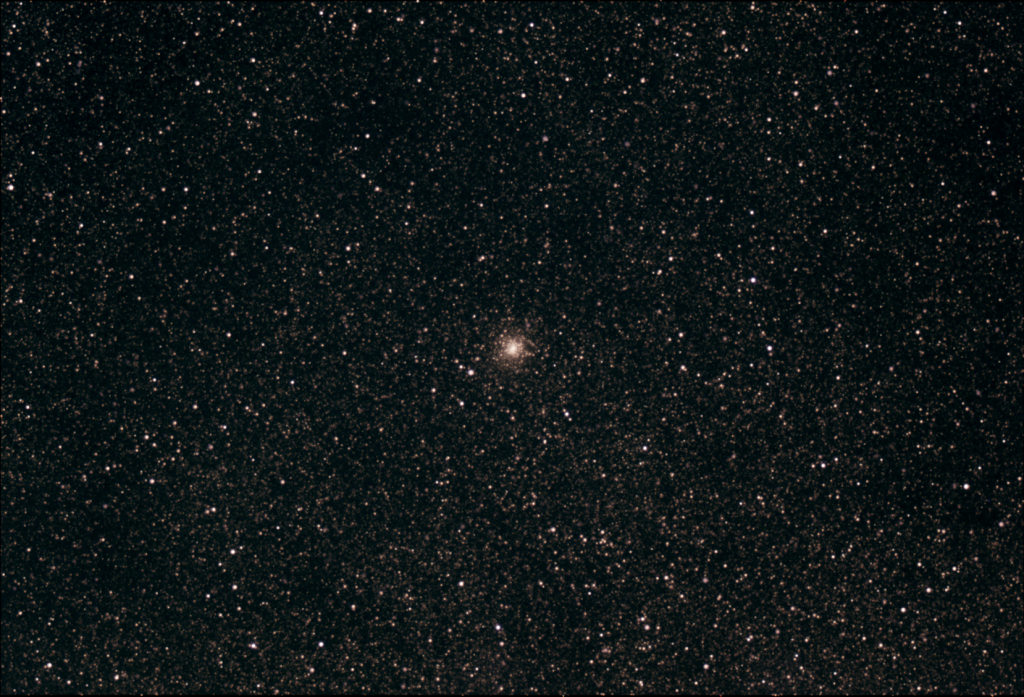 I had hoped to get a few more. I tried for M6, the Butterfly Cluster, but it was still too low and the garage was in the way. It was late and it had been a long fun day so I decided to pack things in at around 1 AM. Another great night of EAA observing with a galaxy from the M81 Group and a few more off the Messier Log. I should be able to pick up a few of the other Messiers in that area next weekend as long as we have clear skies.

Going to enjoy the day off and probably take a nap later.