My INDI All Sky Camera Project has been up and running for over a month now. I finally got around to building a home for the all sky camera to get it out of the center of the driveway. Just a simple 4×4 post with a perch on top to hold the enclosure. 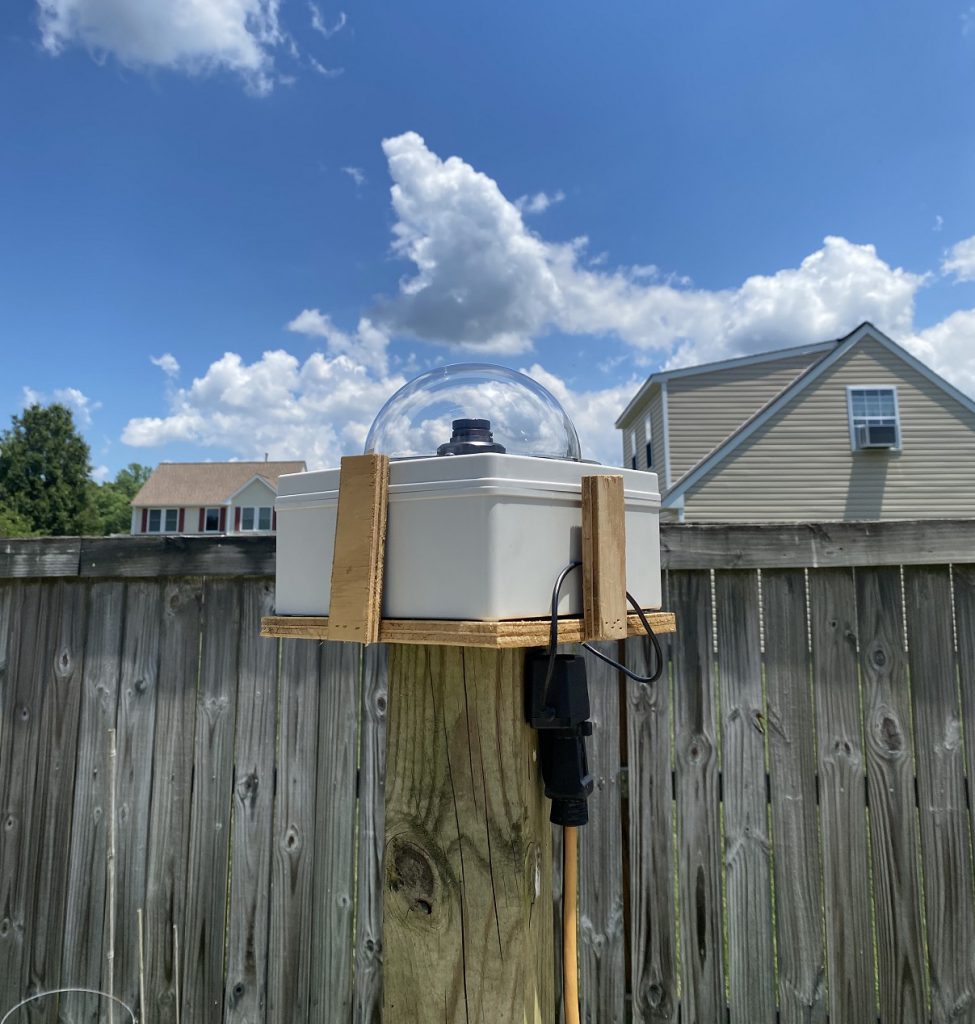 My goal here was to get the all sky camera off the ground and out of the middle of the driveway. I’ll probably come up with something a little more robust, but this will work for now.

Over the last month the All Sky camera has captured some interesting things. I regularly see airplanes and satellites streaking through the images. Sometimes birds and even bugs make appearances in the daytime captures. Puffy clouds and contrails throughout the day and stars, including the big dipper, move across the sky at night.

In this star trails time lapse which was generated the morning of 06/01/2022 you can see a satellite pass (upper left), a couple of airplanes (lower left and lower right), and at least 3 meteors (actually I think 4 meteors) which were captured throughout the night. 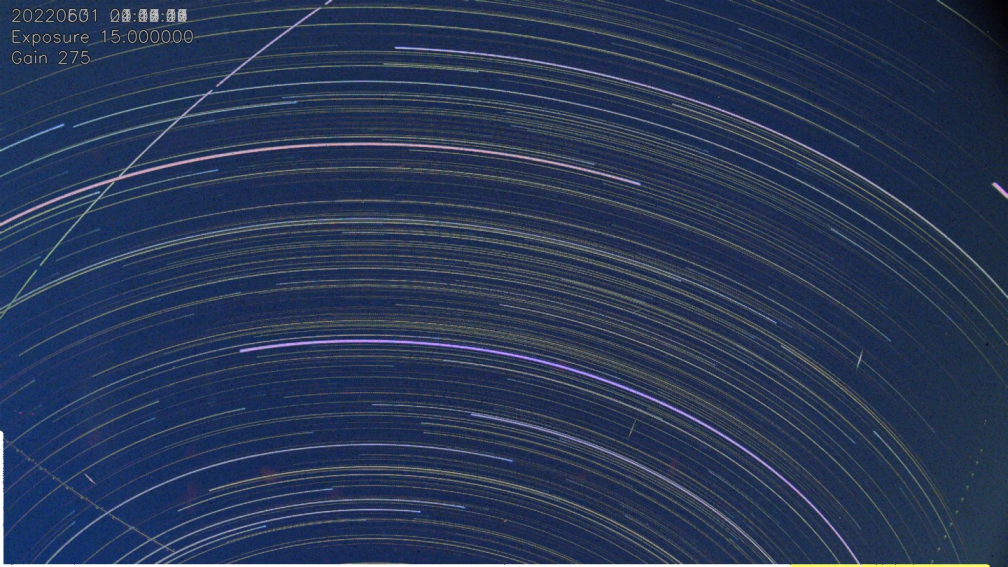 The star trails image is not a single long exposure, but a stack of all the images from the night. INDI All Sky also generates a time lapse video of each night and day captures. The star trails and time lapse video are created automatically with the process kicking off when there is a transition from Day to Night or Night to Day modes. I currently have the Night mode configured to transition when the Sun is at -12 degrees below the horizon. 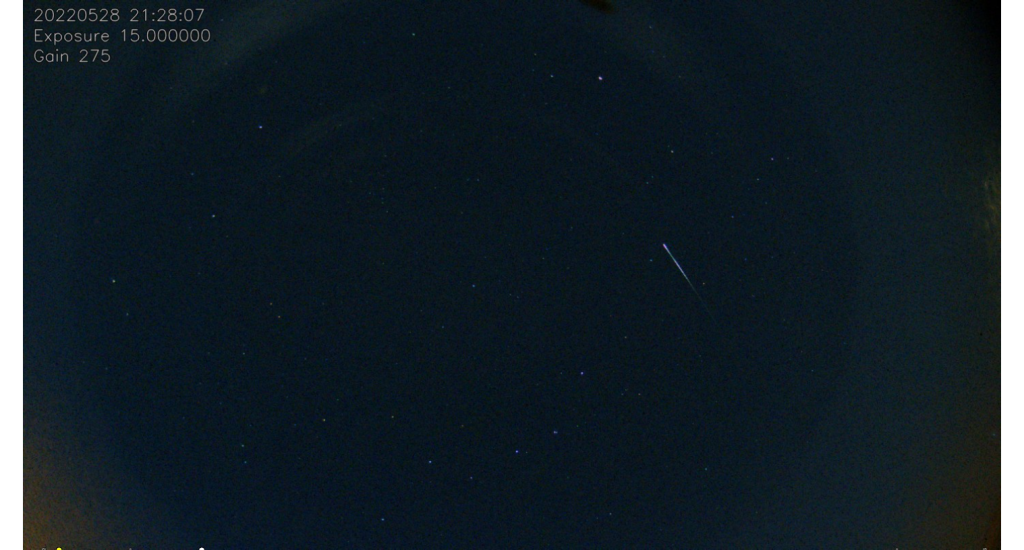 It has captured many other faint meteors but this one was pretty bright which made it very easy to find in the time lapse which was generated for the night. The big dipper is visible center bottom of the field of view.

The All Sky camera has been through several storms now. So far the weather resistant enclosure for the All Sky camera is holding up well. A little moisture makes its way through the neoprene I used to make a gasket between the dome and the enclosure. This causes some condensation on the inside of the dome, which I need to figure out how to fix. No water is getting into the box where the Raspberry Pi is housed.

During storms lightning usually shows up in the images as just bright flashes. In this capture during a storm on 05/21/2022 the timing was just right and the camera actually captured a lightning bolt. 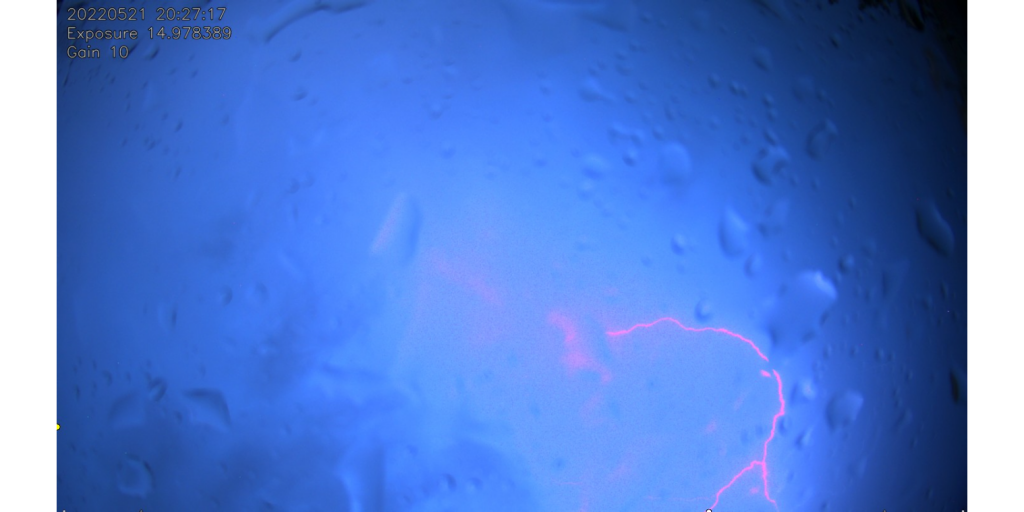 I thought that was pretty cool.

I used a black sharpie to blacken in the white letters on the 2.8mm camera lens. I can still see the reflection of the lens in the dome from time to time, but the letters on the lens are not visible anymore. This makes the images a little cleaner.

More information on my All Sky Camera project can be found in these posts:

INDI All Sky is being actively developed. Aaron, the developer, is regularly adding enhancements and making improvements to the code. If you have a camera with INDI support that is looking for a cool project, INDI All Sky may be that project.