The forecast had not looked very promising last night. It was suppose to be mostly cloud but just before dark the skies were mostly clear so I put the Celestron C6 SCT on the mount and balanced everything. The skies stayed pretty clear until about 10:15 PM so it turned out to be a nice EAA observing night. I am still learning the new ZWO ASI294MC Pro camera and had some great EAA observing even though there are a few issues that I need to work through.

I created a dark frame to apply to the captures during the live stack. This removed the hot pixels I was getting in the captures from the previous EAA session. I took 10 x 10 second exposures at 200 gain bin 2×2 and had SharpCap Pro create the master dark frame. I used this dark through out the night.

I had a bit of trouble with vignetting and deformation on the edge of the FOV using the F/6.3 focal reducer. I originally spaced it out to 105 mm and I had no trouble getting focus on stars in the center of the FOV but the stars around the edges FOV were very badly deformed. I played with the spacers a bit and ended up with a focal length of about 1095 mm and focal ratio of F/7.2. Still a lot of vignetting and some deformation of stars to the edges but not as bad as at F/6.3.

All these EAA images were capture with my ZWO ASI294MC Pro through my Celestron C6 6″ SCT with a F/6.3 focal reducer and live stacked using SharpCap Pro. The mount and cameras are remotely controlled with KStars/Ekos/INDI running on an Astroberry Raspberry Pi. The images have been resized and cropped for size but otherwise appear just as I observed them.

M81, Bode’s Galaxy. I started with M81 to have something to compare directly to 03/04/2022 EAA observing though the AT66ED. The FOV is smaller in the C6, but there is some really great detail that is starting to be resolvable in the outer arms of this galaxy. This is a live stack of 90 x 10 second exposures at 200 gain with bin 2×2. 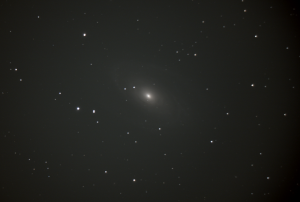 There is a fair bit of vignetting caused by the focal reducer but I can live with it for now. Will shoot some flat frames at some point to try to help offset that.

M46, Open Cluster. This is another one I revisited from the previous nights EAA session. M46 is also on CloudyNights’ March EAA Challenge. This is a live stack of 60 x 10 second exposures at 200 gain binning 2×2. 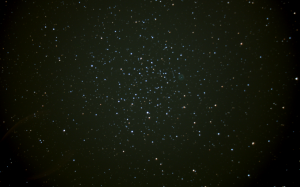 The planetary nebula NGC 2438 is easily resolvable in this picture. Still some vignetting but some nice color in the stars.

NGC 1999 a reflection nebula in Orion. This is a new one for me and one of the objects on the CloudyNights’ March EAA Challenge. This is a live stack of 60 x 10 second exposures at 200 gain bin 2×2.

M108 a barred spiral galaxy in the constellation Ursa Major. Another object on the CloudyNights’ March EAA Challenge. Definitely more detail here than what I was getting out of the AT66ED and the SV305. This is a live stack of 60 x 10 second exposures at 200 gain bin 2×2. 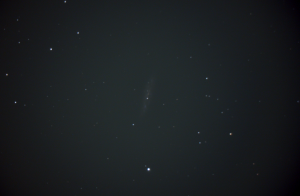 Definitely more detail resolved faster here than what I was getting out of the AT66ED and the SV305. 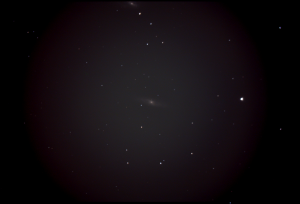 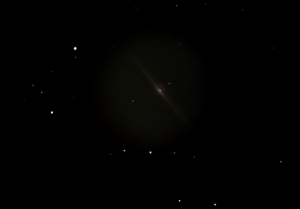 First time observing the Needle Galaxy, but it won’t be the last. I had a little trouble with some high thin clouds while observing this one. 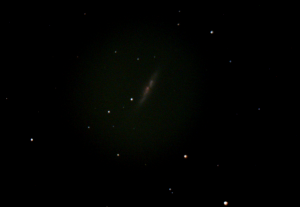 I had hoped to get a bit more of this old favorite but the clouds started moving in 🙁 After a few minutes the live stack started dropping frames due to the clouds.

By about 10:30 it was almost completely cloudy so I decided to pack things up. Not a bad EAA session for a night I had not planned on being able to do any observing due to the forecast. Had a great time and enjoyed the old and new EAA observations.