Yesterday was cloudy and rainy for most of the day, but things started to clear up in the late afternoon. I had taken the scope down and put it in the garage due to high winds the night before. Since it looked like things were going to clear I set back up in the driveway and decided to do some EAA testing with the Celestron 6″ SCT and the Meade F/3.3 Focal Reducer.

The adapter I needed to go from the SCT threads on the focal reducer to a 2″ barrel for the Crayford focuser arrived so I put that in the image train. 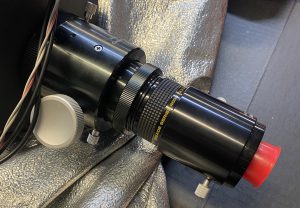 The temperature changed quite a bit from what is was earlier in the day (mid-60s). It was cool (around 32 degrees), mostly clear, with a bit of a breeze which gusted up every now and then. There were some thin clouds/haze off to the northeast and east. I did not really have a plan for the night other than to test out the Celestron C6 with the F/3.3 focal reducer. No new targets tonight, just some EAA to compare the AT66ED and the Celestron C6.

I did a visual polar alignment using the polar scope. The I slewed the scope to bright star to get focus. Obtaining focus took a minute but it did come into focus. I used the focuser on the back of the SCT to bring the star into focus, then used the Bahtinov mask and the fine focus on the Crayford focuser to dial it in.

All these EAA images were capture with my SV305 Camera through my Celestron 6″ SCT and live stacked using SharpCap Pro. The mount and cameras are remotely controlled with KStars/Ekos/INDI running on an Astroberry Raspberry Pi. 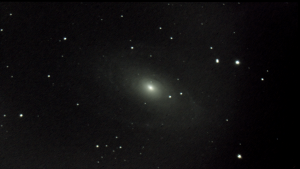 I can resolve a bit more of the outer arms and some of the dust lanes in the disc. The stars out to the edges of the frame are a bit distorted, this is caused by the focal reducer. 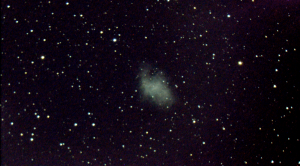 Definitely brighter and with a bit more detail than resolvable in the AT66ED.

Nice and bright as always. Lots of nice nebulosity. Color seems a bit off to me, but that is probably the camera (or the settings of the camera). 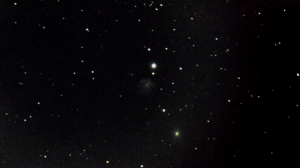 I first captured this in the AT66ED for the Cloudy Nights February 2022 EAA Observing Challenge. It is a bit brighter in the C6 and I can start to resolve some of the spiral arms. NGC 2300 is also in the FOV. 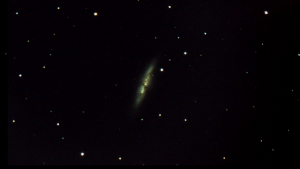 This one is really nice. Able to easily resolve the dust lanes after just a few stacks. 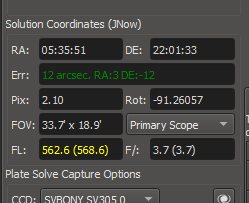 Even though it will calculate the actual FOV and focal ratio this needs to be pretty close for plate solving to work correctly.

It was fun testing the setup and I enjoyed the results. When using the Celestron C6 SCT and the Meade F/3.3 focal reducer there is some deformation of the image around the edges but I kind of expected that. It would be a lot worse with a larger camera sensor so the small chip on SV305 seems to be pretty well suited for this set up. The extra 3.5 inches of aperture over the AT66ED definitely made a difference.

Overall a nice night for some EAA.

It is suppose to be clear tonight so I am hoping to try out the F/6.3 focal reducer to see how that does. Bit slower focal ratio, but hoping there will not be as much deformation of the stars.