Last night was cold but clear so I set out to try to catch a glimpse of the Andromeda Galaxy EAA style with the SV305 Camera. Same setup I have been using the past few nights, my Stellervue 80mm scope for visual observing and I have the SV305 Camera attached to my AstroTech AT66ED. Both scopes are riding side-by-side on a Celestron CG5 GOTO Mount.

The Andromeda Galaxy or M31 is found in the constellation of Andromeda. It is about 2.5 Million Light Years away from us. One day the Andromeda Galaxy will collide with the Milky Way (one day about 4 billion years from now). In a very dark sky it can be seen without a telescope but with a modest telescope or even a set of inexpensive binoculars you can easily see the bright center and even make out some of the dark dust lanes.

Here is a 47 x 8 second live stack of the Andromeda Galaxy: 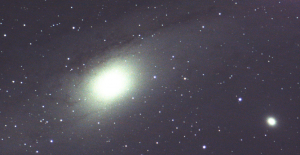 Look at those dust lanes, very cool. Andromeda is huge, I am only getting the center of it in the camera’s field of view. It’ would take field of view about 3 times this to get the whole galaxy. That’s another galaxy, M32, in the lower right.

Next up the Triangulum Galaxy (M33) located in the constellation Triangulum. This is a 76 x 8 seconds live stack: 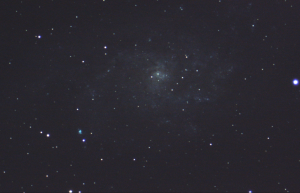 Really happy with how this one turned out. It is faint, but I can see the arms of this spiral galaxy. My mount was only aligned well enough to get 8 seconds exposures, if I tried to do more, 10 or 15 seconds, the stars started to elongate. Will do a better polar alignment and have another look to try to get some more, and longer, exposures.

I also had another look at the Orion Nebula (M42) tonight. A bit more detail but it is pretty washed out still. Will keep messing with the exposures and gain on this one. 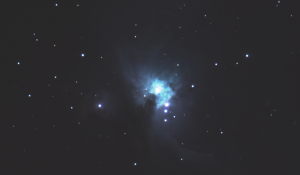 I was able to see more of the outer dust clouds.

Was out looking up for about 3 hours before I got over being cold. Another great night observing.