Finally some clear skies, cold but clear. Just after dark I aligned the mount and started looking. Jupiter looked amazing and I spent a bit of time just admiring it and its moons. But I really wanted to give the SV305 Camera a go, so I put the camera on the AT66 and away I went. 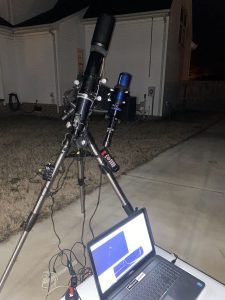 The Stellervue 80mm and the AstroTech AT66ED are mounted side by side on my CG5 mount. Right now I am using the 80mm for visual observing through the eyepiece and have the SV305 Camera on the AT66ED connected to my laptop for EAA.

First up the Owl Cluster (NGC457) an open cluster in the constellation Cassiopeia. This is one of my FAVORITE open clusters. This image is from a live stack of 139 x 1.5 second exposures. 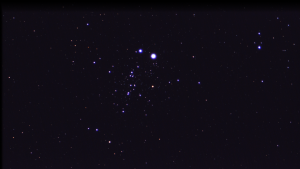 I really like this cluster and the SV305 Camera did a great job capturing the white, blue, yellow, and even a few red stars.

Next target was the Double Cluster (NGC 869 and NGC 884) two open clusters in the constellation Perseus. This image is from a live stack of 72 x 1 second exposures. 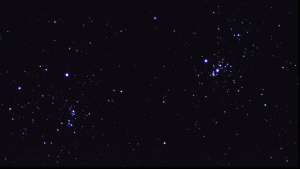 Really nice color in the stars. The yellow stars really pop out. Pretty nice to get most of both clusters in the same field of view.

Then over to M37 an open cluster in the constellation Auriga. This capture is from a live stack of 91 x 1 second exposures.

This looks pretty good, there are a lot more stars in the capture than I can see through the eyepiece, but I am definitely going to revisit M37 and do some longer exposures.

Had a quick look at M15 a globular cluster in the constellation Pegasus. This image is from a live stack of 23 x 4 second exposures. 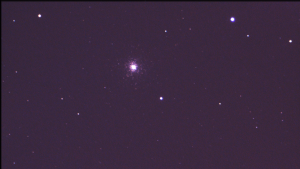 Finally M42 in Orion rose above my garage so I could get it in scope. This image is a live stack of 160 x 1 second exposures. 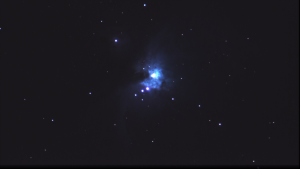 I need to tinker with the camera settings a bit, early on in the live stack I could resolve some of the individual stars in the Trapezium, but these washed out as more frames were stacked. I messed around with the gain and the exposure time. The longer exposures did resolve more of the nebula but really washed out the Trapezium.

Here is a picture of what the Orion Nebula Live Stacking in SharpCap looks like on the laptop screen. 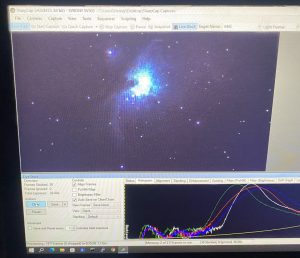 One second exposures with the gain set pretty high. You can see lots of the nebula extending to the top and bottom, but the center is really washed out. Orion is getting higher in the sky each night so I’ll get some more time on it in the near future for sure.

Still learning the settings in SharpCap but overall I had a great time observing though the eyepiece and practicing some EAA with the SV305 Camera.

Spent a couple hours looking and messing. Packed it in early since it is a school night and I was cold. Looking forward to clear skies tonight…