Clouds and crappy weather for the next day or so, I actually packed away the telescope since the wind is suppose to whip up this afternoon. It has been set up in the back driveway since early December. I was digging through my files on the NAS, my archives, and came across some planetary images I took a bunch of years back. I found a few images of Jupiter, Saturn, and Mars which I captured back in 2010, 2011, and 2012.

This is a series of images I put together of Jupiter which were taken on 01/06/2012 with the Celestron 8″ SCT using the Celestron NexImage Solar System Imager. The series shows the transit of Jupiter’s Great Red Spot (GRS) over the course of about an hour and 15 minutes.

The GRS is in the lower dark cloud band of this image moving across the images from left to right. You can also make out the eddies or whirlpools in the cloud band following the GRS. Theses whirlpools can be seen pretty clearly in the next to the last image of the series. Really enjoyed taken the different captures and putting them together. Jupiter is spinning pretty fast, it’s amazing how much movement and change happened over the short period of time. I had a lot more details about the session and this capture on the old SuffolkSky.com site, I’ll see if I can dig it up.

Jupiter taken on 09/18/2010 with the Celestron 8″ SCT using the Orion Starshoot DSI II. Not really what this camera was designed for but I was just testing things back in the day. 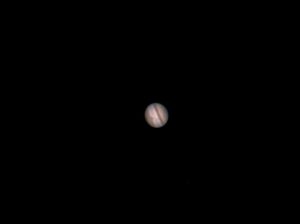 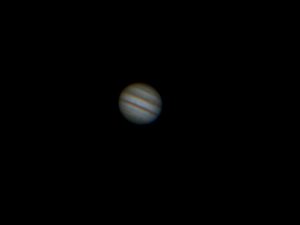 The Solar System Imager captures a video of the object. The frames in the video are then stacked to bring out details. I used a program called Registax to stack the video frames. No GRS in this capture but some nice detail in the cloud bands. 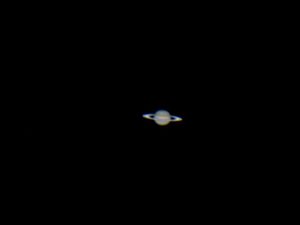 This image was also created by stacking the captured video frames in Registax. Some decent detail on the rings and the cloud bands on Saturn’s surface. This is definitely one of my favorite planetary images I have found in my archives. 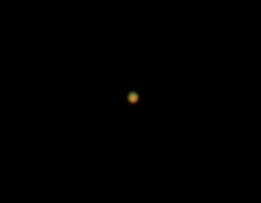 The AT66ED is not the right scope for planetary observing or imaging, I think I had just got it back then and was just messing with it to see what it could do. I am sure I have some pictures of Mars taken through the SCT but I’ll have to dig around a bit more.

Here recently I have visually observed Jupiter and Saturn but have not done any EAA with planets. I did get a nice capture of the Moon when it was nearly full back in December. The SVBONY SV305 and my Celestron 8″ SCT should work great for capturing planets. Looking forward to trying out some EAA on planetary objects in the near future. Probably after I get a bit further along in the Messier Log.