I have an old Nikon D60 DSLR which has been in a box for about 10 years. It is still in decent shape and works. The Nikon D60 was a lower end inexpensive 10 Megapixel DSLR released back in 2008. It took pretty decent pictures (and still does). I used this camera tinkering with some astrophotography 10-12 years ago, figured I would see what it could do for EAA. If you have Nikon D60 and are trying to get it to work with Ekos/INDI hopefully this post will save you some googling. 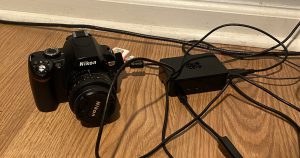 I cleaned up the camera and I tried to charge the battery. The battery would only hold a charge for about 10-15 minutes so I ordered new batteries for it. I picked up two EN-EL9 batteries and a charger from Amazon for about 1/2 of what I remember the cost of one battery being (which was at least 10 years ago). With the new batteries charged up I took a few pictures and the camera works great. Replaced the battery in the old IR remote and tested it, it works as well.

When I used this camera for astrophotography back in the day I would set the camera up to use the IR remote, hit the button on the remote to open the shutter, start a stopwatch at the same time, when the stopwatch reached the time I wanted for the exposure, I hit the button on the remote again to close the shutter. Not the most accurate way to measure exposure time and a real pain in the ass, but it work and worked fairly well. This image of Andromeda was taken using this method. 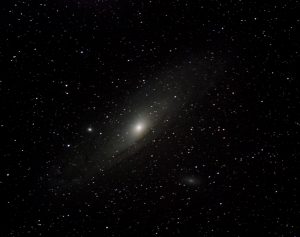 I have a few other galaxy shots I captured using this camera which you can find here.

I wanted to figure out what I could get working with this old Nikon D60 DSLR with Ekos and INDI as another camera option for EAA. There is an INDI driver available, indi_nikon_ccd, for Nikon DSLRs which supports the D60. The camera is connected to my Raspberry Pi with the INDI Server running the Nikon DSLR driver. I created an Ekos profile on my desktop PC using this driver, started the profile, the INDI Control Panel opened, and the camera connected!!! The first time you connect up the camera with Ekos a popup opens and you have to set up the sensor size and pixel pitch. For the Nikon D60 the sensor size is 3898 x 2616 and the pixel pitch is 6.05 µm x 6.05 µm.

The only way I could be the camera to work with KStars/Ekos/INDI was to disable (turn Off) the Force Bulb option for the camera in the Options tab on the INDI Control Panel and use an exposure time which matched one of the camera’s preset exposure times. 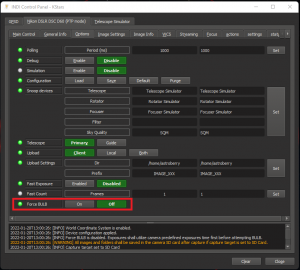 I did a lot of googling and what I found is that it appears the Nikon D60 does not support bulb over the USB connection. I tested doing bulb exposures with gphoto2 from the command line as well, also without success. The bulb setting is there, but the only way to trigger it appears to be using the shutter button on the camera body. The only way to do exposures longer than 30 seconds is to use the Time setting and the IR Remote 🙁

Since I am able to trigger the camera remotely, through Ekos and INDI, using the preset exposure lengths. I set up Ekos to capture a number of exposures at different preset times and these all worked fine. Images were transferred to the configured folder on my desktop PC over Wifi in less than 1 second per image. I was able to capture and save images in RAW, JPG, and FITS. 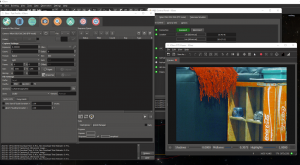 I tested taking exposures after changing the format, image size, and the ISO in Ekos, all these settings worked as expected.

I’ll do some more tinkering and testing but I am pretty sure the best I am going to be able to do through KStars/Ekos/INDI is the preset exposure times for the camera. This is due to capabilities of the camera, if the camera supported Bulb over the USB connection it would probably work.

So a maximum of 30 second exposures it is. I think, at least for EAA, that will be fine. I mean I can always go back to standing beside the scope and using the IR remote and a stopwatch if I want to do longer. 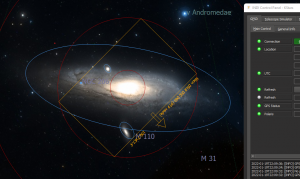 Looking forward to giving the Nikon D60 an EAA try when the weather clears. Even with the 30 second exposure limit this camera should do great on Andromeda, the Orion Nebula, probably the Veil Nebula, maybe even the Horsehead Nebula… It’s something else to keep me busy while I’m saving up for a ZWO ASI183MC Pro 🙂

If you have a Nikon D60 camera and have been able to get exposures longer than 30 seconds through Ekos/INDI it would be great to hear how you did it. Drop me a note in the comments…