Last night I set up the gear and got things ready for the clear skies we are expecting this weekend. I wanted to test out the ZWO Electronic Automatic Focuser (EAF) focusing on the main scope using the Autofocus routine in the Ekos Focus Module and to also manually focus the OSSAG camera on the guide scope. Once it got dark enough to see Polaris I did a visual polar alignment with the polar scope, then powered everything up, started the INDI Server, and connected to the gear through KStars.

The setup I am using for the next few nights is the SV503 102ED with the .8 Focal Reducer and the SVBONY UV/IR Cut Filter. The ZWO EAF is attached to the SV503. The primary camera is the ZWO ASI294MC Pro. The guide scope is the 60mm SV106 which is riding on top of the SV503. My old Orion StarShooter Autoguider (OSSAG) is attached to the SV106. Everything is riding on my old reliable Celestron Advanced-GT CG5 equatorial mount. All the gear is controlled by KStars/Ekos through an Astroberry Raspberry Pi.

After doing the visual polar alignment I launched KStars and connected to my Ekos profile. I used the Ekos Focus Module to run the Autofocus routine with the EAF. My starting focus point which I had set when I initially set up the EAF was 10411 steps, this was actually pretty close. I ran the Autofocus routine a couple of times and the final focus was at 10250 steps. Really happy with the way the EAF worked, focus is definitely much better than I was ever able to get it by hand. There will be a more detailed post on using the Ekos Focus Module in the future.

The guide scope is the 60mm SVBONY SV106 which has a helical focuser on in. The focus was pretty close and it only need a little bit of tweaking to get the guide camera focus to where I was happy with it. Locked everything into place. I don’t usually use the guide scope during my EAA sessions, but I have been toying with the idea of doing some longer exposure astrophotography stuff, so just seeing what I can get to work.

I had not planned to do any observing but I did want to test things out, so over to the Andromeda Galaxy, M31, for a couple of test live stacks. 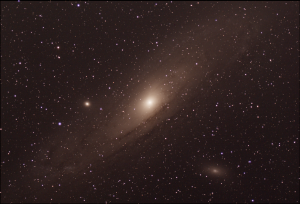 For this one I turned on guiding and set the exposure length to 2 minutes. This is a live stack of 10 x 2 minute exposures at 121 gain, bin 2×2. 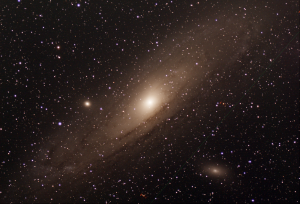 I don’t think I will typical run this long of exposures, especially in my EAA session, but it did validate my guiding was working. Would have been an excellent result if an airplane had not buzzed through the exposure about 12 minutes in.

Definitely happy with the way the gear performed. Tonight I do plan to shoot a new set of flats prior to my EAA sessions this weekend, but that is all the prep work I should need to do. I should be able to get right to EAA observing. Plan to check out of few objects on the CloudyNight’s October 2022 Monthly EAA Observing Challenge. Looking forward to a couple of clear nights.